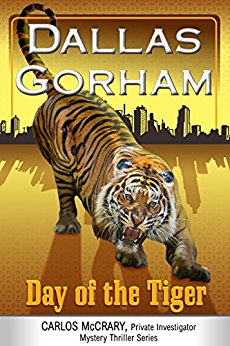 Carlos McCrary is a private investigator, not a cop, thank you very much (quite possibly my favorite running gag throughout the entire novel). Hired by a millionaire, ex-NFL hotshot to help a friend, McCrary’s life just got a lot more exciting.

Now, please believe me when I say that this is, at its core, wholly a private eye novel. A modernized version, for sure, but it stays mostly true to the formula. It didn’t follow the ‘damsel in distress’ trope as much as others seem to. That was nice. While it remains committed to its genre, it defied many stereotypes with its characters.

I can honestly say I enjoyed every character in this, with the exception of the villain. I don’t think he was designed to be a sympathetic character. And he was good at making the reader dislike him. All the characters were integral to the development of each other, in one way or another. The plot almost feels constructed around them—that’s how well it aided them.

The plot was fairly intricate. Several overlapping story lines peppered the narrative. All of them were needed for it to feel complete. It really felt well-rounded. Everything made sense and I didn’t have any questions left at the end. The mystery part of the book was really disguised as background information and world-building, in my opinion. It was how the readers’ learned information that added depth to the characters and the world, without boring or overloading them.

I also enjoyed the diversity of the characters. I liked how they were treated and how the narrative came together around them. That diversity was another place where stereotypes were broken. It helped add a bit more realism and relatability to the cast of characters.

I loved the way everyone interacted. There was plenty of drama to go around, for sure. However, the difference came during how they handled everything. There was no unnecessary in-fighting, simply for the sake of drama. People got along, had good relationships and good foundations.

Action and dialogue were at a good balance. Action was carried out with realism rather than flashy Hollywood stunts. It really felt that McCrary was flying by the seat of his pants instead of miraculously knowing exactly how to escape a situation. That’s not to say things weren’t too easy sometimes, but he still at least hit a few speedbumps.

Quite possibly the series I’ll turn to when the mood hits me for the genre. Very well done. Excellent characterization. Definitely a good read.