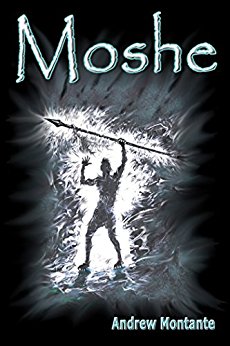 Moshe was an interesting experience. It was a very unique blend of Christian mythology and fantasy.

The most interesting part was how well the mythos was blended. Moses and the Exodus from Egypt was used as the basis for the village’s origin story. It set the tone for not only culture and setting, but something of a timeline, as well. Now that I think back on it, there were a few more hidden within the narrative, only much less obvious.

Characters were done well. I enjoyed the fact that Moshe had a stutter—and one that was more on the realistic side. Calish, even as a secondary character, was huge, and an integral part of the plot. I loved his story arc. His relationship with his sister, Bishtar, was amazing, as well. He was protective without being overbearing. Bishtar herself was one of the few females written in, but she wasn’t given a supporting or nurturing role. She wasn’t there to only further the development of the men. She was an active character, with her own goals, and own story line. And the ending to her story arc was wonderfully surprising.

Getting through things in the beginning was a little trying. There’s a deficit of description in areas, and grasping the setting took me a moment. Things changed so quickly, however, that it almost didn’t matter. The subterranean portion of the story is where the meat is. There’s a retelling of what happened at the beginning throughout, so the reader still manages to glean the necessary information.

Once things get going, they flow nicely. More characters are introduced, and the plot really thickens. The story lines remain distinct, well-thought out, and very intertwined. All the characters and their interactions were necessary for developmental purposes, or simply to push the plot along. They were definitely a creative wrench to throw in for the protagonists. I liked how it highlighted the struggled and victories of two cultures coming together under trying circumstances. There were quite a few interesting, creative, and different messages in the narrative that aren’t found very often.

Moshe turned out to be quite the read. It was well-written. What it lacked in description, it made up for in powerful characters. The plot strayed to the original side, and the ending left me satisfied. A very well-rounded book for a variety of readers.